Since I’ve been working a lot at my day job, I haven’t had the energy to work on the game outside of the Sunday streams. Unfortunately, I also had to cancel a couple streams, so progress lately has been pretty slow. I also forgot to post a devlog update after this past stream. Oops!

This past weekend, I built out a full rough draft quality version of the “dots” puzzle area. Here’s a screenshot from the editor of the entire area as it currently exists. 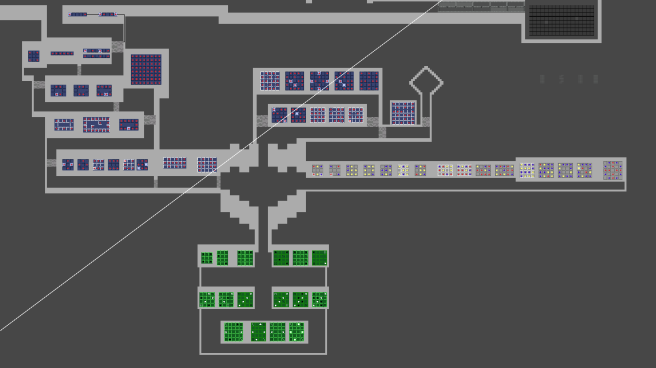 The player enters from the top left, learns the basic mechanics and then the area branches off into some variant types of puzzles which layer on some additional mechanics. This is good because it maintains interest and gives the player options, although the exact puzzles will need to be iterated on until they have a good sequence flow.

But even accounting for that future improvement, I still feel like the area is a bit too flat overall. It’s just kind of a bag of panel puzzles, without a lot of interaction with the environment. I don’t yet have clear idea on how to fix that, but I will hopefully come up with something.

Mostly this critique comes from comparing the area to the dice face area, which is perhaps the most developed area currently in the game. That area has a few problems of its own at the end, in that I don’t feel like I quite switch it up enough right at the end, but there’s definitely a good interplay between the core mechanic of the area interaction with the environment.

Next up, I’d really like to improve the walking animation for the player, and do some more concept art. Then I have some ideas that I want to try out as an alternative implementation of one of the other areas in the game.

Add Taiji to your Wishlist!