After making the changes to the “dice face” puzzles which I described in a previous blog post, I ended up with a few edge case puzzles which didn’t work under the new mechanic, but were still within the boundary of the game’s subject matter. This meant that I would need to do some extra engineering to keep these puzzles working the same way. This caused me to confront some of the growing problems with my puzzle design tool.

Here’s a screenshot of the old interface: 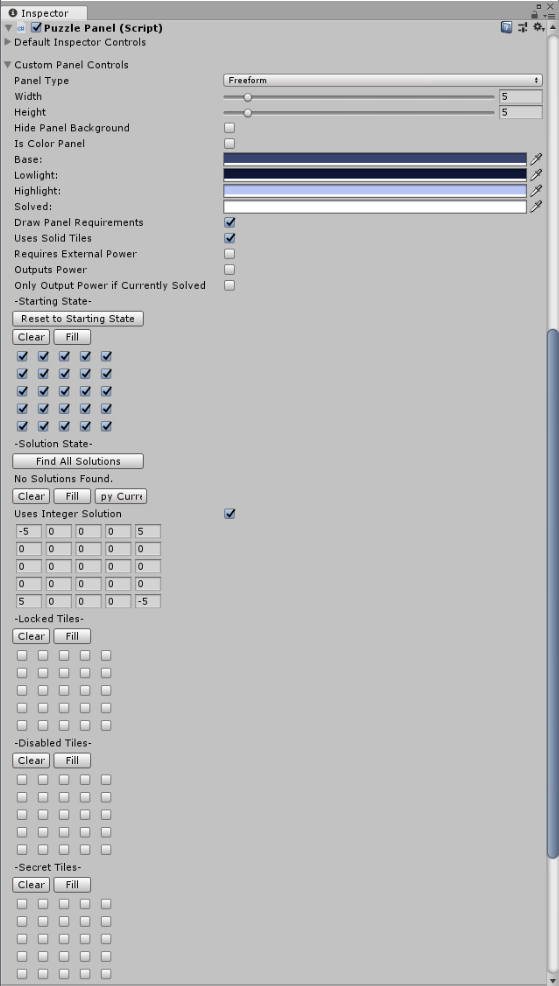 This is the tool that I use to design all of the puzzles in Taiji. Although it has been perfectly serviceable, it was starting to take up a bunch of vertical space, and there are additionally a bunch of very subtle details which were starting to make it icky to work with on a regular basis. Additionally, if I want to add more functionality (which I do), it was becoming very unclear how I was going to add it, both in the interface, and the underlying code.

So I have done a bunch of under-the-hood work, which although completely invisible to players, allows me to clean up the code andrevise the puzzle designer interface.

This is how it looks now:

Although also somewhat complex, it actually has more functionality than the interface shown above, while taking up a bit less space. (Admittedly, these aren’t the same puzzle, so it’s not a 1:1 comparison, but I don’t really want to take the extra time to grab a better screenshot right now.

There are still some more improvements that I’d like to make, including basic ones like making sure all the input boxes still line up when there are disabled tiles on the panel, but overall I am much happier with the interface and the underlying structure of the code going forward, and I think it will definitely be more amenable to adding new functionality.

An award-winning graphic designer, an independent game developer, a self-published novelist, a movie and video game critic, and everyday artist. Matthew VanDevander lives in the great state of Tennessee and is on a never-ending quest for the deeper meaning of life. View all posts by Matthew VanDevander