This week I didn’t spend a ton of time on the game, nor did I add anything flashy. However, I did take some of the things that I learned last week while improving the puzzle panel editor GUI and used them to redesign the editor for my custom animation system.

Although this certainly worked. It was pretty cumbersome to add new animations or tell what you’re looking at. As you can see, the first Sprite Animation component simply has a flat array references to the other Sprite Animation Strip components. Unfortunately, it is impossible to tell the difference between each animation in the list, because all the duplicate components have the same name. Not to mention, having a bunch of separate components wastes vertical space on irrelevant information, and overall… it’s just a mess. 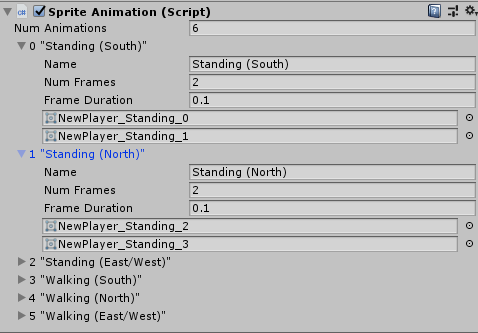 Although it is almost functionally identical to the previous system (in fact, this is the same set of animations), you can see that there are a number of usability improvements here. For one thing, each animation gets its own name, this makes things way more readable.

Now, you might ask, why even go through the trouble of writing your own animation system when you could just use the built-in Unity animation system, which surely supports way more that this.

I prefer as much as possible for the code to be doing the heavy lifting on things like this, so the Unity GUI editor and data-driven approach just doesn’t appeal to me. Additionally, although the Unity system is fully featured; for a 2D sprite-based game, it’s just overkill. I’m not doing animation blending, so thinking about the animation as a tree is a strange way to think about it. Essentially, a 2D animation is just a flipbook of frames. That can be represented as a 1D array both in the code and in the interface. If I give each of these arrays an index, this makes it super easy to change an animation from within the code. There’s no need to for me to create a FSM with a state change graph and all that when I could just set an animation index. If I want to change which animation is currently playing. I can just do this:

playerAnimation.index = 0; //Or the index of the animation that I want

And the animation component will just change over to the new animation and continue handling the playback.

Now, it is perhaps a bit cumbersome if I want to think about things in terms of the names of the animations, as the code is not particularly illuminating on this front, but that can either be handled by just adding a comment to the code, or by creating a lookup that maps from the name to the index.

Either way, it just works better for me.

Additionally, as with the Puzzle Panel editor, reducing the overall complexity on both the editor end and the code end leaves me with much more room to add, without having an overwhelming amount of unnecessary complexity. For the time being, the only frame animation in the game is the player’s walking animations (which need to be redone), so I don’t really need more functionality than this.

That may also mean that this was a misappropriation of my limited time to work on the game, but time will tell.

Add Taiji to your Wishlist!